The benefits of an Independent

An Independent representing you has a better chance at working closely with government than the Liberal opposition party committed to being in opposition.

Dean Strautins is the LIBERAL ALTERNATIVE:
When you read the Inauguration speech from Liberal Alyssa Hayden you will probably conclude that such a speech is intended to emphasise Alyssa is in opposition to the elected Labor government and does not help residents of Darling Range gain action from the elected McGowan Labor Government for the Darling Range.  Download the speech.

Dean Strautins has a bigger vision for SJ Shire that requires more attention to planning and core infrastructure to facilitate an improved lifestyle. Liberal started their campaign promising just $1 million for tourism development for the Shire and only if the whole Liberal party wins the election and forms government ! As an Independent Dean Strautins always believes he can achieve far more for the Shire than just $1 million towards job creating infrastructure.

As of 15 February Alyssa has made more financial promises probably because I have called her out for the miserly $1 million promise. The Liberal promise of a multi million dollar police station in Byford just shows the pessimistic view Alyssa has of Byford. Alyssa expects the Byford train station to be the new Armadale.

Fortunately as Liberal will not form government then none of the Alyssa promises will ever happen.

Liberal and Labor are both promising money for roads that will only happen from the one party that forms government. Vote for Dean Strautins and the electorate will still receive the election promised money when government is formed. But with Dean elected the Darling Range will also gain the chance for more investment on income generating infrastructure such as a Library Building.

Dean Strautins has a bigger vision for SJ Shire than Labor that has NOT committed any funding towards infrastructure to improve education and employment opportunities for SJ residents.

An SJ Shire based Independent representative will bring more focus to the needs of residents of SJ Shire than the Labor representative not living in the Shire. The Labor candidate has not worked at state level politics so would likely follow superiors and their dictates that will not include SJ Shire.

State wide, Labor is not investing in the start-up network as Labor will not fund the $1 million asked for by the biggest Start-Up organisations based in Perth. Yet Labor is happy to take the taxes generated by startups in WA that are worth more than $1 Billion ,        such as VGW. Labor’s under investment is crippling job creation in WA and not supporting job diversity that is needed for WA to be recession proof and deliver gender balance to job activity.

It is globally accepted that new jobs come from start-ups. Labor ignoring this fact is causing greater unemployment risk for all of us in Darling Range. This Podcast clearly communicates the missed opportunity for our residents.

in 2020 Dean Strautins attended Western Australia’s largest innovation and Business Development networking function at Geraldton. At that event the Labor ministers of Alannah MacTiernan and David Kelly both made it very clear to us all that they will not cause any extra start-up sector investment and they have lived up to that by not announcing any substantial increase of investment in the start-up sector!

Dean Strautins’ work of 3 years in the start-up sector for the Stockholm School of Economics in Riga demonstrated that for every $1 of government support there was a return of $10 to $18 of taxable income generated for the economy.  It is my intention to have a start-up Incubator and Business Development Centre established in Byford for the benefit of all Darling Range residents and here is the website as a show of commitment. The FaceBook Page for the IBDC 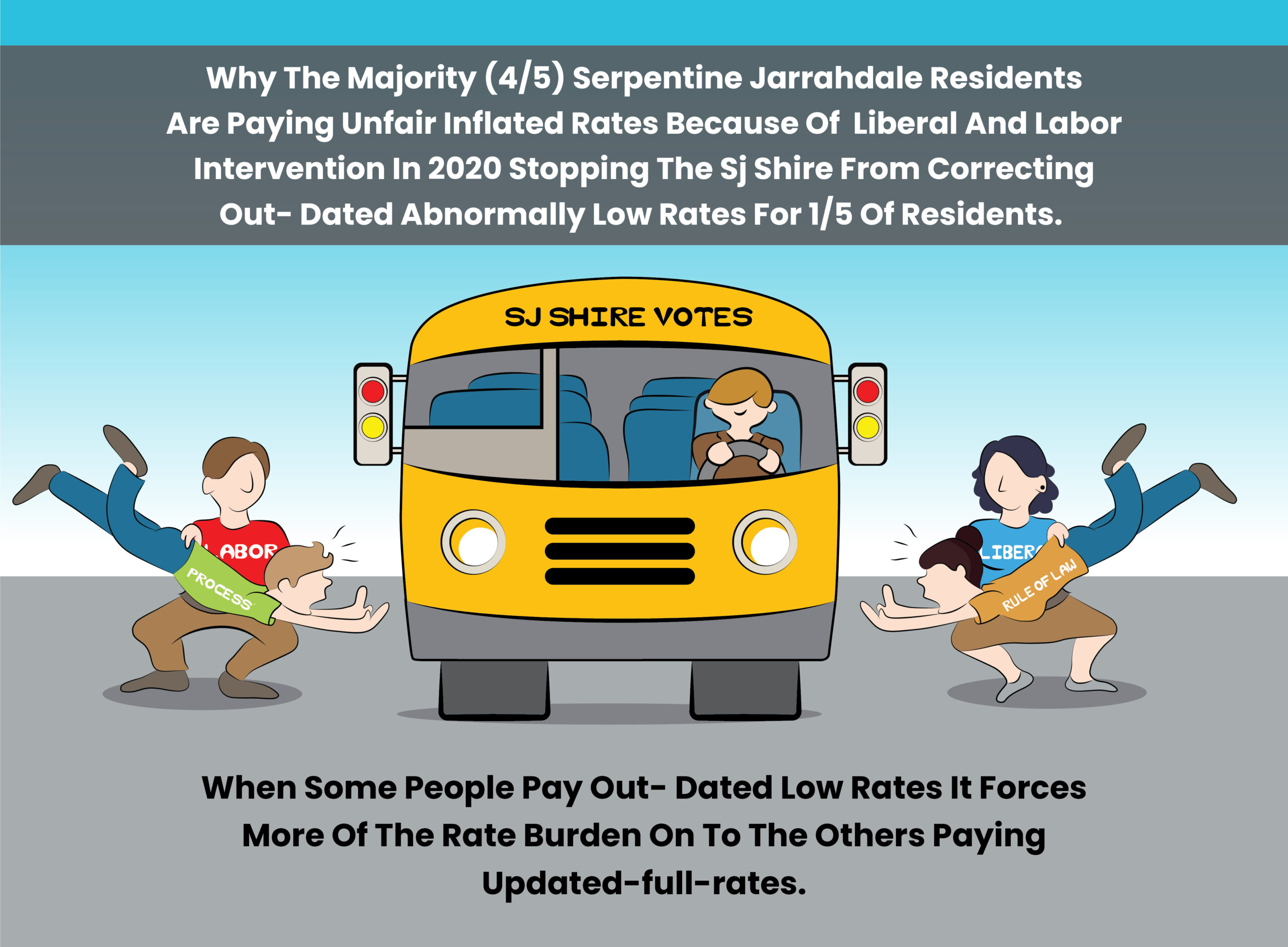 In 2019 the Shire started work towards correcting past administrative errors about out-dated rates for about 1/5th of residents living on lifestyle blocks of land. These people were being given subsidised rates that are meant to apply to people earning income from their land. So if they were no longer using their land to earn rural orientated income then they had to have their rates updated to a residential rating system. The urgency of this came from two areas:

A. Their rates were last updated around 1988 so these people had already benefited from at least 20 years of reduced rates. So there ought not have been an argument about having a correction applied that was not going to be back dated.

B. There are over 400 mortgage stressed properties (Families 3 months or more behind in mortgage payments) in Byford that are paying inflated rates because others were paying abnormally low out-dated rates.

During 2020 the SJ Shire worked on a necessary long and inclusive process towards correcting these out-dated rates . The Shire Council answered every single question asked directly from individual residents of the Shire about rates. 99% of people had a misunderstanding about their rates and most often thought they would pay much more than they would in reality under updated rates.

But then the conversation was taken up by Labor and Liberal that led to sensationalising and inflated misunderstandings.

The Shire did not stop the process because it has invested a year of Council staff work, over $40,000 of costs (Rate payers money), and the Shire is legally required to correct administrative errors it identifies with regards to rates.

These rates have to be corrected in the near future and this will most likely happen after the state election. The misinformation being spread among Shire Residents includes:

1. Some people paying full rates are mis-led in to thinking their rates will go up. The reality is their rate burden will decrease when out-dated rates are corrected.

2. Some people think the Shire just wants to make up an excuse to gain more money from rate payers. But the Shire reduced rates for about 67% of people in 2020 because the value of properties decreased.

3. Some people claimed that the rates freeze meant residents missed out on a rates reduction. But this is not true as the Shire reduced rates for about 67% of residents during 2020.

4. Some people think that the state government mandated rates freeze during covid-19 meant the Shire was disobeying this order by seeking to correct the out-dated rates. But this is not true as the process was started at the Shire before covid-19 started and was never expected to be voted on to be activated during a covid affected economy.

5. Some people had an understanding that any rates increase of their out-dated rates would be applied within 1 year and not spread out over many years. They claimed they were pensioners and could not afford it. But they had not bothered to claim their $750 pensioner discount rate and instead chose to get angry at the Shire.

6. Some people were misled to believe pensioners were being unfairly treated. But the majority of Pensioners in the Shire in 4/5ths of properties are paying their full rates. Pensioners also receive a $750 discount off of their rates. This means there are households in the Shire not paying any rates at all. For example their rate bill is $1400 a year but the two Pensioners owning the house are entitled to $1500 of rates discount.

7. Some people have neighbours paying full rates and have been misled in to thinking it is ok for them to demand to stay on lower rates than their neighbours.

8. Some people have been misled so they do not understand that rates are a tax and not a fee for service. This means that people can not say they will pay rates only if they get something in return.

11. Some people were misled to think the Council should provide them with Street Lights. But Street Lights are provided by Western Power and have nothing to do with the Shire Council.

12. Some people were misled to think the Council should maintain Street Lights. But Street Lights are provided by Western Power and have nothing to do with the Shire Council. If a Street Light needs to be fixed then a call should be made to Western Power to inform them of the street light number.

13. Some people were misled to think the Shire was excluding them by not providing them with footpaths. These people did not know people in the suburbs pay for their own Footpaths as the cost of them is included in the cost of buying their land. Sometimes the Shire can put money towards Footpaths but that is usually from extra funding the Shire receives from the state government.

14. Some people were so misled they argued that their Roads are in a poor condition so they do not want to pay full rates. But over the last 20 years the Shire has not collected over $20 Million from the people with out-dated rates. If the Shire had this money then it could fix every road and add more footpaths.

15. Some people did not know they could deffer paying rates. This is possible because when a property is ultimately sold then the Shire Council can then collect the unpaid rates.

16. Some people were misled to believe the only reason the rates are too high is due to the ‘Rate-in-the-dollar’ being too high. But if the out-dated rates were updated then the rate in the dollar could be reduced!

17. Some people were misled to believe updated rates would be applied during the covid downturn. This is not true because the state government and the Shire Council had not made any decision about when it would be implemented.

18. Many people were misled to think that if they had special circumstances they could not apply successfully to the Shire to have their circumstances reduce their rate burden.

19. Some people argued they did not have parks. But most have access to walking trails paid for by the Shire. We all know we all travel to get to a park we prefer to use.

20. Some residents stated that the Shire Council should pay attention to decreasing costs than to correcting their low out-dated rates. But the Shire has reduced costs by over $500,000 so that Shire expenses are $500,000 less than in 2017 regardless that the Shire population has grown.

If every resident was to start arguing as to why they did not want to pay rates then suburban residents could ask why they are paying towards the six Volunteer Fire Brigades in the Shire that mostly benefit those people not paying full rates.